Meredith Salenger
Supergirl (aka Kara Zor-El) is a superhero from the planet Krypton. She is the first cousin of Superman and the only other survivor of the extinct world Krypton.

In the Teen Titans Go! to the Movies teaser trailer, Supergirl is reduced to cameo status. She can be seen sitting in the back of a theater waiting for an Alfred movie.

Much like her appearance in other [DC medias, Supergirl has flowing blonde hair. She keeps it back with a blue headband, and her jewelry consists of sapphire earrings. Her top is red and hasKrypton's symbol for hope (Superman's yellow "S"), and her blue cape also acts as straps to help her not expose herself. So far her waist and below have not been shown, so we don't know if she chooses to go traditional or skimpy. Later, she wears your classic costume, blue shirt with red miniskirt, cape and boots. 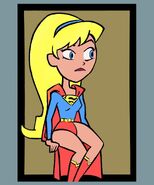 Add a photo to this gallery
Retrieved from "https://ttgfanon.fandom.com/wiki/Supergirl?oldid=7638"
Community content is available under CC-BY-SA unless otherwise noted.