"There is good and there is evil. There are those who commit crimes and those who stop them. The two sides

are opposite, as different as day and night. And the line between them is clear. Or at least it's supposed to be." — Robin

Robin (real name Dick Grayson) is a character in Teen Titans Go! He has appeared in many fan series.

Dick Grayson is a teen vigilante who once trained under the Batman. He became Robin at a young age after his parents were murdered. After years of training as Batman's sidekick, Robin left to become more independent. He later became the leader and one of the five founding members of the Teen Titans.

Though Robin technically possesses no true superhuman powers, his courage, skill, experience, determination and personal strengths are enough to make him a highly formidable adversaries even for those with superhuman abilities. Having undergone an evidently vigorous and intensive training regimen under Batman, perhaps the world’s most skilled hand-to-hand combatant, Robin has exercised physical form to the pinnacle of human perfection, surpassing even the finest of athletes in combat proficiency and power, to such a scale that he has been called a "one-man army" by the Master of Games.

Intimidation: It is known that Robin has the ability to instill fear in others, even the people that know him best can be intimidated by him.

Master Acrobat: Excellent in gymnastics and acrobatics. He was born to a family of circus acrobats known as The Flying Graysons.

Peak Human Conditioning: Through intense training, Robin represents the pinnacle of human physical ability. His physical characteristics are greater than that of even an Olympic level athlete. His strength, speed, stamina, agility, reflexes, durability, senses and coordination are at peak human perfection as possible for one of his age, to improve even further with continued physical and mental growth.

Robin engages in intense regular rigorous exercise (including aerobics, weight lifting, gymnastics, and simulated combat) to keep himself in peak condition, and has often defeated opponents whose size, strength, or other powers are much higher than his own. He has spent his entire life in pursuit of physical perfection and has attained it through constant intensive training and determination, to the point that, in Apprentice Part 2, he is able to take on all of his teammates at once and beat them (this is particularly significant as he is not trying to hurt them.)

Martial Arts Master: Robin is one of the finest human combatants on Earth, his skills honed to such a level even superhumans and armed adversaries can be overpowered by them. He has mastered several different martial arts styles from across the world, learned from the Dark Knight and the True Master. He even learned some alien martial arts from Blackfire in "Sisters".

Master of Stealth: Robin, despite the bright colors he wears, is a master at stealth, capable of breaching high security facilities with ease, without being detected.

Master Detective: Robin is an expert detective and logical thinker, able to solve cases before anyone else.

Master Tactician and Strategist: Robin comes up with excellent strategic plans to expose and defeat criminals, always aiming to "work smarter, not harder."

Escapologist: Robin is shown to be able to escape even the most elaborate of traps.

Tracking: Robin is shown to be able to pick up a criminal's trail long after any given crime.

Expert Thief: Robin has shown that he's quick well at playing the role of a thief, as he had shown when he went around as Red X and when he had swiped X's belt in "X"

Expert Mechanic and Vehicle Driver: Excellent at motorcycle driving. Robin was also responsible for the creation of the high-tech Red X suit, capable of defeating multiple superhumans with ease, and he and Cyborg developed the T-Communicators. He has also used the Tower's own technology proficiently, including its computer and his own laptop. 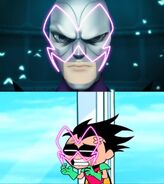 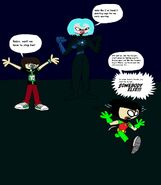 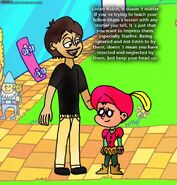 Add a photo to this gallery
Retrieved from "https://ttgfanon.fandom.com/wiki/Robin?oldid=7794"
Community content is available under CC-BY-SA unless otherwise noted.