'Raven is a character in Teen Titans Go! She has appeared in many fan series. In Alvin and the Chipmunks: The Left Leg, when Theodore Seville (Jesse McCartney) turned her into a horse, she wears a black feather headdress that replacing her medium-length black hair and black saddle on her back that replacing her black leotard. Her alter ego when fighting with legs is Lady Legasus, where as Lady Legasus, Raven replaces her casual outfits with a saffron-colored sleeveless leotard with matching wristbands/cuffs and yellow booties. Her leotard has her logo of a golden leg in a darker-colored circle on the breast area. In one episode where Raven acted as Lady Legasus called "Lady's New Outfit," she cut the middle of her leotard, turning it into a bare midriff outfit to look more attractive to her fans.

She is a camper in Total Drama Titans and is not yet eliminated.

Raven is the new security/night guard on Robin's Fazhuman Pizzeria at the night shift turn. Have an animatronic named "Ravenoxy 2.0" (called FNaF Raven) who is mangle or foxy 2.0, and is an animatronic from the future Five Night At Robin's 2 and is based on Raven 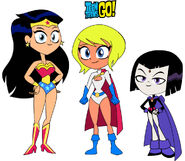 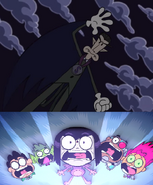 Add a photo to this gallery
Retrieved from "https://ttgfanon.fandom.com/wiki/Raven?oldid=7797"
Community content is available under CC-BY-SA unless otherwise noted.